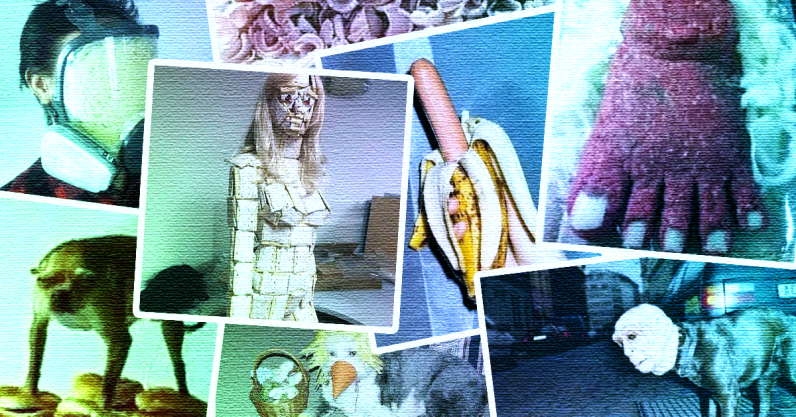 This week was Upvote Everything Day on Imgur (the procrastination black hole I spend way too much time on). So instead of the usual feel good fluff and pandering cute pet pics, the front page was crowded with GIFs of women giving birth to candy abominations and video clips of lederhosen-clad German pop-folk music weirdos. Just like god intended.

However, it also usually brings to the fore one of my all time favorite types of content (or at least the one I mildly obsess over), cursed images.

I have a horrid fascination with cursed images. What interests me is why exactly an amalgamation of seemingly mundane objects unsettles me so much. I also start to wonder about the story behind each image, imagining what was going through the artiste’s mind and the awkward amount of work and forethought that had gone into it to make it reality — and all without a guarantee of ‘success’ or any sort of recognition.

Of course, there’s a wide range of photos that constitute ‘cursed images’ — snapshots of weird moments, uncanny photoshop jobs, and pics of things that are always unsettling, no matter the context — but to me the true cursed images are the ones that require determination and physical execution.

[Read: A scientific analysis of the Facebook group where millennials pretend to be Boomers]

Just like handmade artisanal items,?we enjoy them for their quality and apparent skill of the creator.?The best cursed images are the ones that show people rearranging their daily reality in a new and challenging way — just for the sheer joy of creation.

Take, for example, the heroes that undertake the humiliating task of cleaning out a laptop’s CD-drive after pouring it full of baked beans. Or the visionary who spent hours waiting for their clam chowder popsicles to be sufficiently frozen for a photo opportunity. There must be a point in the creative process where crippling self-doubt settles in and they are forced to ask themselves ‘why am I doing this, what am I doing with my life?’

But the brave people behind these images have persevered and overcome the doubt instilled in us by traditional societal convention. I salute these people for their selflessness and contribution to a free and open society.

But what then are the actual building blocks of a properly ‘cursed’ image?How can we push our fellow people into?truly seeing?their environment, by jarring them into a new state of awareness with challenging imagery?

After careful analysis, the building blocks of the proper cursed aesthetic are:

In these trying times, we need everyone to think of how they can give back to society and add to the general benefit of humanity.

So long story short, I put a ketchup smiley on my little brother’s foot and made him dip his toes into soggy cereal and took a pic. You’re welcome.

Plus a bonus behind-the-scenes pic taken by my mom. If you hated this article, don’t @ me.

The original version of this article was first published in our weird little daily newsletter, Big Spam. Sign up here, you might regret it.